It’s great when your favorite movie characters unite in real life and delight fans with pleasant meetings. Scarlett Johansson, Brie Larson, Robert Downey Jr., Chris Hemsworth, Jeremy Renner, and the other Avengers set off on a tour and began with a charity event at Disneyland California. They all looked very stylish, but the girls stood out especially – charming blondes chose bright red outfits, and Bree even wore symbolic sneakers with Mickey Mouse. 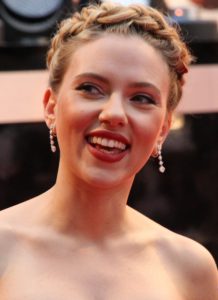 For such a joyful event most of the cast chose the standard style of smart-casual. Scarlett Johansson and Brie Larson, who relied on the red color, brightened up this dark ensemble. And also Robert Downey Jr., who remained faithful to his bright style and put on his scarlet pants.

The actor, who celebrated his 54th birthday on the eve, during a trip to California also shared a fun dance with Instagram followers, which apparently was devoted to the beginning of a promo tour and the reunion of the Avengers team.

Although the most gallant Hollywood actors were close by, Johansson eclipsed all: the already spectacular Scarlett chose a scarlet top for the event, a flowered skirt with floral print and sandals on ribbons. Not without bright lipstick and blond curls, laid in a soft wave – an incredible beauty!

The actors met with their little fans, signed autographs and made a small photo session, and after they took part in the launch of the Avengers Universe Unites charity initiative.

The stars donated $ 5 million in cash contributions and toys for non-profit foundations to help children.